Believing When It's Beyond Reason to Believe 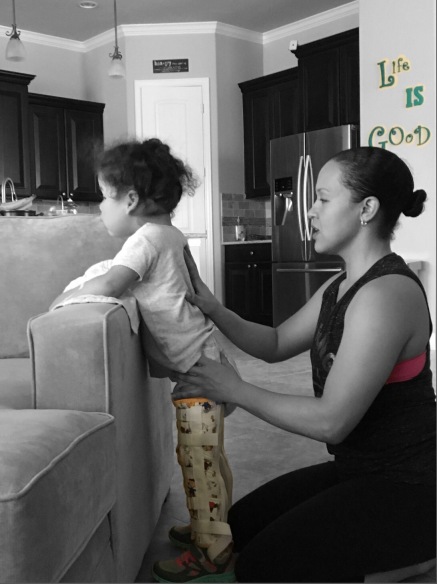 THE EARTH IS FLAT.

This might sound absurd today but at one time, this statement was deemed absolute truth. You’d look like a complete fool to claim otherwise. Elementary history lessons taught us that it took a brave explorer, Christopher Columbus, to dare to believe otherwise. I know there are historical claims now that counter the story of Columbus, but please just humor me for the sake of an analogy. So here’s this widespread belief that you sail to the edge of the earth and fall off. Yet, this guy is willing to risk more than just looking like a fool, literally “falling off the face of the earth,” to prove otherwise. What guts, but my, what glory when the earth just happened to turn out to be round. Isn’t that where every great feat is birthed? In the womb of some crazy, daring, don’t-care-about-looking-like-a-fool, raw boldness?

One evening as I flipped to the front of my bible, frustrated that I could never remember the order of any of the books (to be honest, still struggling to remember some of the more basic biblical details), I randomly stopped in Exodus. Something caught my eye in the annotations. It explained how overwhelmed Moses must have felt when God was guiding him to tell Egypt’s leader to let the Israelite slaves free. The paragraph focused on how foolish Moses must have felt when even his own people didn’t believe him, yet he was to approach Pharaoh with the same craziness. It tugged at my heart SO intimately. I couldn’t help but feel excited to be reminded of the magnitude of delusional faith… how it is to make crazy claims, only based on God’s nudges, and then watching those crazy claims manifest… to see outcomes that make you say, “But God.” That sort of makes the most sense, though. Yes, we thank God for the everyday little things but how much greater is the glory when there literally is no earthly explanation, “but God.”

A few weeks ago, as I ironed… yes, I have a domesticated side that, at times, may or may not emerge like the Groundhog on Groundhog Day. I mean I was ironing sooo… it’s looking sunny for the next six weeks, people. Well as I was ironing, I was intently listening to Steve Furtick’s Sun Stand Still. The chapter I was tuned into set my faith on fire! The biblical truths poured in and the world’s facts melted to the wayside. My heart stirred and bubbled over with mountain-moving boldness. As Furtick finished up a sentence on inviting God to do big miracles in our lives, miracles that could ONLY be attributed to God, I blurted out,” Okay, God! Sophia is walking into school next year!”

Immediately, my sensible self stomped into my mind and demanded, “Hold up just one minute! Why would you say that out loud? Now you’re going to have to believe it! Great! Thanks a lot!” So, some might think this is really weird… my sensible self arguing with my faith-filled self. Oh. It’s a M-E-Double S up in this head. It’s challenging to be vulnerable and showcase the circus in my mind, but usually I can end my crazy rants with… “God is faithful. It happened. It came to be.” The difference this time? I’m writing about the earth being round before I’ve even sailed to the edge and returned, proving it’s not flat.

I literally was sick to my stomach when I thought about sharing, to anyone who will listen, that I am believing for Sophia to walk into school next year. It makes me tear up because I always fear that my own desires will rise out of my mouth instead of God’s will. I fear sharing a belief, it not happening, and people dismissing that GOD IS ABLE. I would rather be silent than do anything that would discourage people to step out on faith. But as much as I logically feel like it’s not possible, I spiritually feel like it’s already done. I even was trying to squirm my way around it… “Well if I got her in the Upsee and walked her into the building, teeeeechnically…”, but I knew what I meant when I said that she’d be walking into school. I began going back and forth with God on it…. “God, this is the toughest thing to believe for. This is the most impossible…” I felt God give me the “Seriously?” look… “More tough than believing for her to breathe?”

No, it wasn’t tougher than believing for Sophia to breathe on her own. Plus, back then I didn’t have any personal David-and-Goliath battles to reference back to… now I had plenty. Looking back on the giants we’ve conquered through God’s faithfulness, I am choosing to believe whole-heartily that Sophia WILL WALK INTO SCHOOL NEXT YEAR.

When I told her physical therapist what I was believing for, her mouth dropped open in disbelief. Sophia’s PT is phenomenal and a true blessing in our life. She believes Sophia will walk too, but she believes it will be in the long run. She is very logical in her approach because of her science background, understandably. After I told her, reiterating how much I understood that it seemed silly, she did share with me that she had had a dream about Sophia the week before. She said she saw Sophia walking with a walker and her leg braces on. She shared, “Well, in the dream, Sophia didn’t look much different than she looks now,” almost seeming to consider the possibility of my craziness. I started crying. Yup, middle-of-the-clinic boohooing. What are the chances that she would dream that before I even shared my crazy belief with her?

When Sophia was on the breathing vent still in the hospital, I would sing this to the tune of “If You’re Happy and You Know It” :

By the Lamb of God, I am healed.

Jehovah Rapha, don’t you know it.

Just watch and He will show it.

So, it only seemed suitable to hijack another song for this battle as well. To some snazzy snapping and the tune of “These Boots are Made for Walking” :

“You made these legs for walkin’,

And that’s just what they’ll do!

One of these days these legs are gonna walk to glorify You.”

Yes, that sums up the normal level of daily goofiness in our household. Oh, don’t let a commercial with funky music come on… Brian and I will throw down into a dance-off… immediately.

So, that’s what we are specifically believing for next with Sophia… that she WILL walk into school next year. Walker or not, leg braces or not… she’s doing it.

Can I ask you to believe with me? Maybe you’ve been around Sophia lately and you see how impossible it looks… could you just believe that impossibilities are overcome, sometimes? Faith the size of a mustard seed… that’s all I’m asking for.

Here’s the disclaimer… The standing picture might be misleading. It is a snippet out of multiple attempts. Sophia holds up her head a lot, but not constantly. We’ve been working on it for YEARS. Same thing with sitting. With support, she wobbly sits, hunched over, pulling her head up here and there. She often pulls her hands back suddenly, falling forward or backwards… still gaining the understanding of her supporting herself. This is progress, though… gained through the YEARS. When I carry her, most people ask if she’s knocked out sleeping because her body is so limp. We’ve recently been putting braces on her legs and, with support, having her push up through her core and neck. She does it in spurts here and there (the picture is showing her most successful upright spurt of energy). It’s amazing to watch.  It’s still a loooong way from walking…. But God.